Dogs can Smell if you are Good or Bad

Beware of Dogs only if you are a bad person. 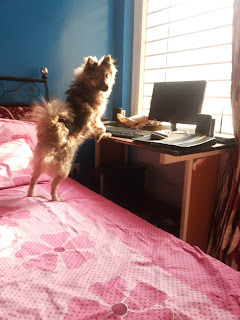 Meet Jeannie, our beloved member of the family.

Since my childhood days, I had always found dogs to be undoubtedly the best human companions. From their wagging tails to showing affection whenever any member of the family comes home, is something that can not be expressed in words.

I guess therefore they have long ceased to be treated by many people as an animal in the strict sense and is more or less consciously perceived as a member of the family.

They are creatures with great mental potential and superintelligence. I still remember how I did a lot of research in order to make sure that I train her with basic yet essential habits (along with some extra commands) in a proper way. Once trained she would never miss to bring the daily newspaper from the porch, bring my slippers and even turn on the PC for me ... lolz Yes! that's true. How I train her to do that? Well, that's the topic for some other day.

Did you know?
The presence of a dog in the family strengthens the immune system of a child from an early age, and also reduces the risk of allergies and asthma.

Regardless of whether they just stole the last piece of bread from the table or destroyed the most expensive shoes, they are still going to be the human's best friend.

In particular, they are very socially conscious, both with humans and with other dogs and many studies have shown that they can feel human emotions, such as differentiating between happy and angry faces and even being jealous. This means that without you having to say a word, your dog can sense some of your feelings and may be affected by them.

However, it does not stop there. Recent research has also confirmed that these animals... oops! I mean our companions, have the ability to sense whether or not a person is trustworthy. In fact, only by looking at a person they are able to understand if it has good intentions or not towards it, towards its owner or those of other people.

This was demonstrated in a study where the reactions of the dogs were analyzed as per the attitudes of the people. From the results obtained it was found that dogs can even judge a human behavior if it is right, not supportive or bad, thereby behaving accordingly.

It is quite natural for dogs to remember someone whom they have met previously. But they can also have a first impression of someone, and they might not like that person. Such skill is not given by their sixth sense, but by their sense of smell, because a human smell can change depending on the mood through pheromones.

And according to one of the theories, dogs can smell chemical changes in pheromones emitted by people which should tell them they have met a bad person.

In short, being human for a dog is like an open book, perhaps it is the only living being that would be useless to tell lies or appear what we are not.

So, the next time your dog barks at someone, pay attention to what it says, because there could be some reason.

Although some dog behaviors may seem strange to us, as you can see, they usually have their justification.

DIY,37,Health,46,Money,17,My Diary,33,News,53,Reviews,28,Science,26,Store,14,Tech,56,
ltr
item
Homies Hacks: Dogs can Smell if you are Good or Bad
Dogs can Smell if you are Good or Bad
Beware of Dogs only if you are a bad person.
https://1.bp.blogspot.com/-bOUyDUS3MRY/XbJcl49daAI/AAAAAAAACI4/3LFSZ805F7w1HfcY2WYi9aD-nJ_GO2p4ACLcBGAsYHQ/s320/Jeannie%2BPC2.jpg
https://1.bp.blogspot.com/-bOUyDUS3MRY/XbJcl49daAI/AAAAAAAACI4/3LFSZ805F7w1HfcY2WYi9aD-nJ_GO2p4ACLcBGAsYHQ/s72-c/Jeannie%2BPC2.jpg
Homies Hacks
https://www.homieshacks.com/2019/10/dogs-can-smell-if-you-are-good-or-bad.html
https://www.homieshacks.com/
https://www.homieshacks.com/
https://www.homieshacks.com/2019/10/dogs-can-smell-if-you-are-good-or-bad.html
true
5792707671424551706
UTF-8
Loaded All Posts Not found any posts VIEW ALL Readmore Reply Cancel reply Delete By Home PAGES POSTS View All RECOMMENDED FOR YOU LABEL ARCHIVE SEARCH ALL POSTS Not found any post match with your request Back Home Sunday Monday Tuesday Wednesday Thursday Friday Saturday Sun Mon Tue Wed Thu Fri Sat January February March April May June July August September October November December Jan Feb Mar Apr May Jun Jul Aug Sep Oct Nov Dec just now 1 minute ago $$1$$ minutes ago 1 hour ago $$1$$ hours ago Yesterday $$1$$ days ago $$1$$ weeks ago more than 5 weeks ago Followers Follow THIS PREMIUM CONTENT IS LOCKED STEP 1: Share to a social network STEP 2: Click the link on your social network Copy All Code Select All Code All codes were copied to your clipboard Can not copy the codes / texts, please press [CTRL]+[C] (or CMD+C with Mac) to copy Table of Content