Useful Tips to Avoid Being Pickpocketed - Don't Miss This

How not to become a victim of pickpockets while traveling. 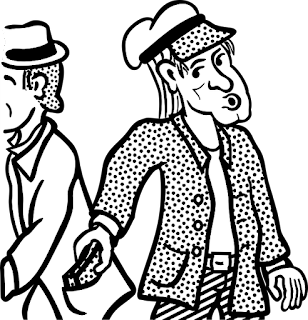 When getting ready for a trip, you try and think through everything to the smallest detail while preparing your luggage and yourself. What clothes to take and how many of them, where you will stay, what and where will you eat, the places where you'll go and so on. Then when you finally reach your destination, you feel excited and within the next few minutes while traveling in a new city you realize you have been pickpocketed. And there goes all of your excitement, let alone the loss you incur.

Theives are so trained in their skills that even if you think that it's not that easy to steal from you yet when they perform their exercise it becomes almost impossible for anyone to calculate that pinch correctly at the time of their malpractice.

Everything happens in the blink of an eye and it does not become easy for you to spot them. Why? because such thieves practically do not stand out from the crowd. In fact, they make their appearance in such a way so as to get mix in the crowd by having an ordinary look and appearance by wearing casual clothes and so.

But still, there are some common features of the thieves that are worth paying attention to so that if caught you can claim your stolen items back. This along with, how to avoid being a victim in the first place - all of this information and tips I've shared below. Make sure to share this article with your friends and family after reading, to help them out too. So let's begin-


A Little Knowledge About Thieves
Appearance
Thieves may not appear differently. In fact, they always make sure to get mixed up in the crowd so that no one can notice them.

Running Eyes
Their eyes though, do not remain stable especially when they are looking for a potential victim, and at the same time looking for whether if they are being watched.

Hand is Hidden
A thief makes sure to hold something in his hand, for e.g. a bag, in order to hide his hand.

Showing Help
Pickpockets often try to offer their help to their targets in order to get closer. For example, to support the woman’s hand, as if helping her get out of a bus or a metro, or to hold the door at the entrance to the store, letting the lady go forward.

It may seem strange and unacceptable to you to suspect everyone who has shown friendliness in a crime, but that's what thieves count on.

Work in Team
Sometimes pickpockets can also work in pairs. One distracts the victim by talking while the second clean his pockets or purses. And there are lots of variations in this scheme. For e.g. sometime ago I saw a piece of news about the CCTV camera video, that went viral, the clip showed how two clever thieves rob the person who came out of the bank with cash. The victim didn't even realize that he was getting robbed, because one indulged him in a conversation while his teammate did his trick.

Women with a Child
Women pickpockets will often carry a child or travel in groups. Taking advantage of the rush hours, one of the members will open the zip of the victim's bag, while the other will then take out the valuables and will pass it over to their other group members. So, even if the victim suspects the woman, nothing is being found later.


How Pickpockets Pick a Victim
Weak and Innocent
In most cases, pickpockets choose women, retirees, and adolescents as their potential victims. The reason is that they are less attentive and vigilant. So, in the event of unforeseen circumstances, they will not be able to provide decent resistance, because they are physically weaker than adult men.

Your Habits Invite Them
Most people instinctively touch their pockets and bags, where they have stored their valuables. Pickpockets notice this, follow them and a little later steal from them.

Remember that an experienced thief by his eye can determine how much money a person has in his wallet.

Popular Attractions
Pickpockets are often here. This is due to the fact that tourists in such places are often very inattentive. They are usually busy taking pictures, exploring different parts of the location, communicating and chitchatting among themselves or via video call and showing how cool is that place. A traveler, discovering new corners of the world, may not even notice how the theft occurred.

Museums
Most museums have an entrance fee, but this does not stop pickpockets at all. In fact, at the time when you are keeping your eyes on some great masterpieces, pickpockets keep their eyes on your bag. Most often, thieves are looking for a victim in popular, crowded and large museums.

Public Transport
There is a very big chance to become a victim in trolleybuses, buses, subways, metros, and trams. In the crowd, in an uncomfortable position, you can not notice the theft and not give importance to the person who pushed you or hurt you as to when traveling, quite often such troubles do occur.

Elevator
This is another favorite area for thieves. One of the group's member will position himself in front of the victim, while the other(s) is/are behind. When the elevator stops, the people who have to go out start pushing to move forward and in this moment of confusion, the pickpockets come into action rob the victim.

Restaurants
During lunch at a restaurant, some people usually hang their bags or clothes on hangers or the backs of their chairs making it easy for pickpockets to get to your things. It’s better to hide and keep them on your laps - not very convenient, but reliable.


How to Avoid Theft and Pocket Thieves?
Travel Light
Robbers often target those who travel with a lot of things, so try to carry little money and essentials with you, and leave your reserve money, credit cards, documents and anything else you don't need in the home or hotel safe.

Be Attentive to Your Bag
Always try to keep an eye on your bag or backpack, which is usually the target of pickpockets. When you get on the vehicles, carry the backpack on the front in order to always have it well visible.
Use a padlock to lock the zips. Prefer shoulder bags as they remain more adherent to your body and you can easily carry them forward near the chest or hold them under the arm if necessary.

Prefer a bag with internal zip pockets where you can store your valuables, while the other less important things can be stored in the outer visible compartments.

Don't Look Like a Tourist
If you have features, eye or skin colors that clearly distinguish you from the rest of the population then it's better to wear sunglasses and a hat. Also, avoid going around showing maps, tourist gadgets and looking around as if you couldn't find your way around.

Caution While Giving Money to Beggers
Never give money to beggars, unless you have some change in your pockets. This will reduce the risk of your wallet being stolen.

Don't Blindly Share Your Card
When you eat at the restaurant do not give the waiter your credit card, instead, go with him to avoid making a copy.

Thieves Come in All Shapes & Sizes
Remember that thieves don't have a costume! They are normal but clever people who mix themselves in the environment. They can be young, old, men, women, rich and poor. Even small children or very old people can also be thieves.

Make a Scream
Scream if you notice that your wallet or mobile phone has suddenly been disappeared on the bus or metro. And look at the floor next to you. Typically, thieves throw off the loot if the victim makes a fuss.

Pursue with Caution
When pursuing a thief alone, do not try to detain him - he may have some sort of knife or anything bad enough that he may use to hurt you. A better choice is to just demand the return of documents that do not have value for him.

Also in a scenario of pursuing a thief in an unknown street be extra careful, he may try to attract and navigate you to come behind him to an unknown location where his/her group members are ready to hurt you.

Take a Break from the Internet
People with headphones and looking only at their phones or tablets are favorite victims of the thieves.

Don't Keep Everything in One Place
One of the basic rules is to split the money and other valuables into multiple places, so in the worst case even if you get robbed, then you'll only lose a small sum.

Traveling consciously means being aware and prepared for any danger and following necessary safety precautions beforehand to avoid such situations in the first place so that you can comfortably spend a peaceful and carefree holiday. So happy traveling and keep on visiting HomiesHacks.com to keep on learning something good every day.