HDD vs SSD: Which is Better?

What's the difference & most importantly which one should you go for? 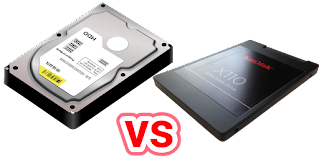 First developed by IBM during the 1950s, HDD could accommodate only a few MB of data since its first release, until later where it could store up Terabytes of data.

HDD in general uses conventional magnetic discs and has moving components inside. These storage drives rely on the performance of spinning disks or platters to read and write data which is directly proportional to the power usage and the resulting sound.

SSD on the other hand is also a storage hardware for computers that was first developed in 2005 by Apple for its products. Over a period of time, SSDs were developed by various other parties.

These drives provide faster speed and lesser power consumption benefits. On SSDs data is not stored in a magnetic layer but on an interconnected flash memory chip. These chips are embedded permanently on the motherboard. So you won't find any moving parts in an SSD. Not surprisingly, SSDs are less noisy than HDDs and much lighter.

Both of these computer storages come with their advantages and disadvantages. So let's understand them quickly:

The main difference between HDDs and that of SSDs is in the technology that they used to store and retrieve data. Yes, we can agree that HDDs are in fact much cheaper and you can easily get more storage space. But SSDs, however, do provide a faster, lighter, more durable experience, not to forget the lesser energy consumption benefit that comes with them.

So, it all comes down to your needs and budget, which will dictate which storage drive will work best for you. For e.g. if you have a strong budget then you can definitely go for SSD or can still consider it if your work requires you to work on some heavy graphic processing software and applications.

Other than that if you are low on budget and also don't require the use of some heavy applications then HDD should be more than sufficient. But again consider every point and your requirement and accordingly take the decision.

DIY,37,Health,46,Money,18,My Diary,33,News,53,Reviews,28,Science,26,Store,14,Tech,56,
ltr
item
Homies Hacks: HDD vs SSD: Which is Better?
HDD vs SSD: Which is Better?
What's the difference & most importantly which one should you go for?
https://1.bp.blogspot.com/-ZqyV-GM9kAI/X75k9LniY5I/AAAAAAAADcw/Xcu20C9y3OAolQEjmAgseMTkRWMXVwphgCLcBGAsYHQ/w320-h167/HDD%2Bvs%2BSSD%2BWhich%2Bis%2BBetter.png
https://1.bp.blogspot.com/-ZqyV-GM9kAI/X75k9LniY5I/AAAAAAAADcw/Xcu20C9y3OAolQEjmAgseMTkRWMXVwphgCLcBGAsYHQ/s72-w320-c-h167/HDD%2Bvs%2BSSD%2BWhich%2Bis%2BBetter.png
Homies Hacks
https://www.homieshacks.com/2020/11/hdd-vs-ssd-which-is-better.html
https://www.homieshacks.com/
https://www.homieshacks.com/
https://www.homieshacks.com/2020/11/hdd-vs-ssd-which-is-better.html
true
5792707671424551706
UTF-8
Loaded All Posts Not found any posts VIEW ALL Readmore Reply Cancel reply Delete By Home PAGES POSTS View All RECOMMENDED FOR YOU LABEL ARCHIVE SEARCH ALL POSTS Not found any post match with your request Back Home Sunday Monday Tuesday Wednesday Thursday Friday Saturday Sun Mon Tue Wed Thu Fri Sat January February March April May June July August September October November December Jan Feb Mar Apr May Jun Jul Aug Sep Oct Nov Dec just now 1 minute ago $$1$$ minutes ago 1 hour ago $$1$$ hours ago Yesterday $$1$$ days ago $$1$$ weeks ago more than 5 weeks ago Followers Follow THIS PREMIUM CONTENT IS LOCKED STEP 1: Share to a social network STEP 2: Click the link on your social network Copy All Code Select All Code All codes were copied to your clipboard Can not copy the codes / texts, please press [CTRL]+[C] (or CMD+C with Mac) to copy Table of Content