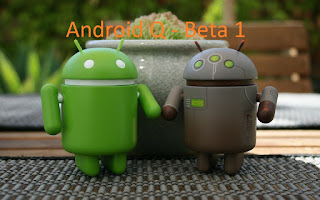 The new version of Android is here. Google has announced the Android Q, which succeeds Android Pie. A first beta is distributed for Pixel smartphones introducing new features and security for end users, and a series of new APIs.

In addition to the long-awaited dark mode that will appear on Android Q, the new version of the OS will also offer the user to more precisely control the permissions allocated to applications, including issues of geolocation or access to records local.

So, now it will particularly be possible to allow an application to only access the location of the smartphone when said application is opened for usage. Thus, an application like Google Maps will not be able to track you in the background if you have this setting.

It is obviously possible to leave the program at any time to return to a stable and public version of Android. Note that in this case the user data of the device will be erased.

The first beta is available for the following devices: Pixel, Pixel XL, Pixel 2, Pixel 2 XL, Pixel 3 and Pixel 3 XL. As we can see, only Google smartphones have the option for this new update. The list, however, is expected to grow over the next beta, but no confirmed info has been shared by the Google regarding this yet.

What are the new Features?

1. Files: No more searching in a tree of hidden folders!
The new Files application displays a search bar at the top of the screen and has a carousel of filters to find the file or document you want.

2. Privacy & Security
In the current version of Android, the user gives the application full access to the data on the memory card - to all, both for reading and writing. In Android Q applications will request separate permission to access each category of data: separately to video, photos, and music. Also, the default will be given permission only for reading, but not for writing.

3. Limits the Accidental Deletion of Icons
If you have a lot of mishandling and unintentionally delete application shortcuts on your home screen, Android Q may save the game. The operating system now offers a small pop-up with each deletion to restore the application if needed.

4. New Battery Indicator
Android Q estimates how much time you have left depending on your battery level and current power consumption.

5. Photo Depth Control:
Applications will now have access to information about the depth of photos.
In Android Q applications can request images with dynamic changes in the depth of the scene. This will significantly improve the performance of the blur effect in the photo and video shooting applications.

The final release of the Android Q OS is scheduled for release in the third quarter of this year.