Let's find out which of these four is best for you. 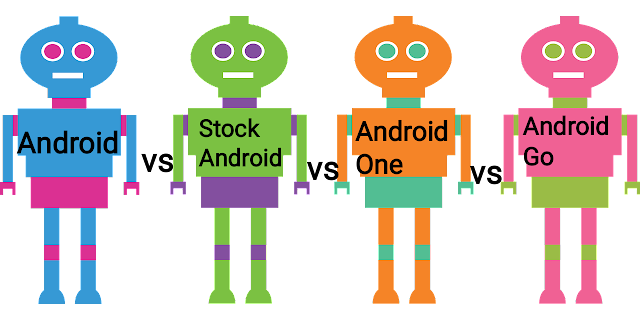 Android does have many versions, not just generations. And you must have heard of Android, Stock Android, Android One and Android Go and would have been probabily confused regarding the differences between them.

Because everyone uses the term Android, you may think that all four are the same.

In fact, all of these cannot be compared because these are different from each other.

Before we discuss the differences between Android vs Stock Android vs. Android One vs Android Go, let's first discuss what is Android?

Android is a Linux-based open source mobileoperating system available on devices such as smartphones, tablets, smartwatches, IoT devices, and many more.

Android is being used by billions of people, making it the most popular and widely used mobile operating system in the world.

With the Android, mobile phone vendors have freedom and control over the operating system installed in their products.

This allows mobile vendors to add new features that might not be available in the standard Android version, and use the interface itself as a vendor's characteristic.

The downside however is that with all the adjustments these vendors do, they are not so quick to update the Android operating system to the latest version. This makes Stock Android, Android One and Android Go phones, which are controlled by Google in terms of software, more attractive if you are not too interested in vendor adjustments.

Stock Android
Stock Android, also known as pure Android, is an operating system that has not been changed in terms of features, appearance, and default applications.

This operating system is intended for devices that Google developed itself namely Google Pixels.

Stock Android also doesn't have bloatware, and gets priority security or operating system updates without any delay. In a way, Android Stock provides a much more pure Android experience than Android One or Android Go.

Android One
Android One is actually not a new operating system but it has been there since 2014.

Unlike the Stock Android, Android One is used by non-Google devices. It was created to improve user experience and system security because it is not based on open source.

Open Source?
Android is an OS that is open source, it means the cell phone manufacturer can modify and decide what will be installed on the cellphone software.

Android One on the other hand is close source and all types of software can only be supplied by Google.

This eventually results in a smoother mobile performance when compared to Modified Android phones.

Android Go
Android Go was originally announced in May 2017 and was intended for low end Smartphones that have less RAM (even less than 1GB) and storage.

You can say that Android Go is the liter version of Android One.

One other difference with Android Go is that the updates obtained are not directly from Google, but from the vendor itself.

So Which One Should You Buy?
If you want a cellphone with more sophisticated and diverse features, then a Modified Android cellphone is a better choice.

If you want a more responsive, safer cellphone performance, and want to taste the latest Android operating system, the choice falls on Android Stock or pure Android cellphones.

If your budget is limited, you can choose an Android One smartphone or even an Android Go.

Final Words
Android, Stock Android, Android One, and Android Go, we cannot choose which is better because each is intended for markets and devices with different specifications. However, since there are plenty of options available, you can easily select the one which is as per your requirement, taste and budget.

Are you still confused by the differences?

DIY,37,Health,47,Money,20,My Diary,33,News,55,Reviews,28,Science,26,Store,14,Tech,58,
ltr
item
Homies Hacks: Android vs Stock Android vs Android One vs Android Go
Android vs Stock Android vs Android One vs Android Go
Let's find out which of these four is best for you.
https://1.bp.blogspot.com/-vjSjRFX1JpM/XWmTi90dC3I/AAAAAAAACFc/2W4U1rHuoHUOM9D8x5qolRl560zW0ndSQCLcBGAs/s640/Android%2BDifferences%2B-%2BHomies%2BHacks.png
https://1.bp.blogspot.com/-vjSjRFX1JpM/XWmTi90dC3I/AAAAAAAACFc/2W4U1rHuoHUOM9D8x5qolRl560zW0ndSQCLcBGAs/s72-c/Android%2BDifferences%2B-%2BHomies%2BHacks.png
Homies Hacks
https://www.homieshacks.com/2019/08/android-vs-stock-android-vs-android-one.html
https://www.homieshacks.com/
https://www.homieshacks.com/
https://www.homieshacks.com/2019/08/android-vs-stock-android-vs-android-one.html
true
5792707671424551706
UTF-8
Loaded All Posts Not found any posts VIEW ALL Readmore Reply Cancel reply Delete By Home PAGES POSTS View All RECOMMENDED FOR YOU LABEL ARCHIVE SEARCH ALL POSTS Not found any post match with your request Back Home Sunday Monday Tuesday Wednesday Thursday Friday Saturday Sun Mon Tue Wed Thu Fri Sat January February March April May June July August September October November December Jan Feb Mar Apr May Jun Jul Aug Sep Oct Nov Dec just now 1 minute ago $$1$$ minutes ago 1 hour ago $$1$$ hours ago Yesterday $$1$$ days ago $$1$$ weeks ago more than 5 weeks ago Followers Follow THIS PREMIUM CONTENT IS LOCKED STEP 1: Share to a social network STEP 2: Click the link on your social network Copy All Code Select All Code All codes were copied to your clipboard Can not copy the codes / texts, please press [CTRL]+[C] (or CMD+C with Mac) to copy Table of Content